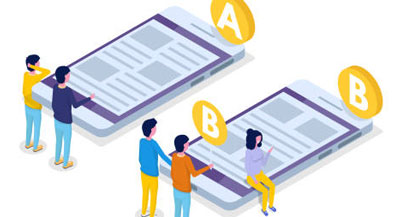 In the marketing and advertising industry, the most important keys to success are research and testing. In the hit television series Mad Men, ad executives can often be seen holding focus groups on just about every project they worked on during the Golden Age of advertising; these days, A/B testing is a more efficient method to gauge the effectiveness of marketing campaigns, and it does not require the complexity of hosting live focus groups.
The concept of A/B testing has been around since the early 20th century; however, the advent of the Internet makes it easy to split campaigns and gauge results in an effort to increase engagement, a strategy that is also known as split testing or a/b split.

A/B testing requires two distinct campaigns for the same end result; this can be two newsletters or two versions of a promotional email message. The idea is to apply variables, which can be defined as different elements. For example, two email messages designed to entice recipients to download an e-book may have different subject lines and content as variables.
Let’s say the e-book being promoted by means of split campaigns is about business productivity. An A/B split may use one email message with a subject line of “Five Ways to Boost Productivity” while another message may feature “5 Proven Methods to Become More Productive.”
The variables may be even more subtle; for example, the best time to send a message to business audiences can be between 9 am and 5 pm, when they are more likely to be at work and checking their BlackBerry devices; but, what about sending the message later? To this effect, message A may be sent at 10 am while message B could go out at 7:30 pm, when recipients are more likely to be relaxing or on their way home from work.

Once variables have been selected, they can be combined for the purpose of evaluating test results. By using an email marketing platform, marketers can create a number of combinations to be sent to different recipients, but no more than once per individual. The goal is to come up with a winning combination, which translates into higher engagement and a greater potential of conversion.
A typical determination of a winning combination would be the message that was read the most, or that generated the highest amount of clicks. The action evaluated may be even more concrete: our example of a business productivity e-book may call for a review of which message elicited the most downloads.
When measuring engagement, marketers must view reports with an open and analytical mind. The variables should not be limited to time of day, subject and content; these are only the base elements. It is recommended to think outside the box with ideas such as:

Using these A/B testing concepts will increase open rates, click through rates, and most importantly, revenue.

You have Successfully Subscribed!

We look forward to speaking with you!